WHAT IN THE WORLD ARE 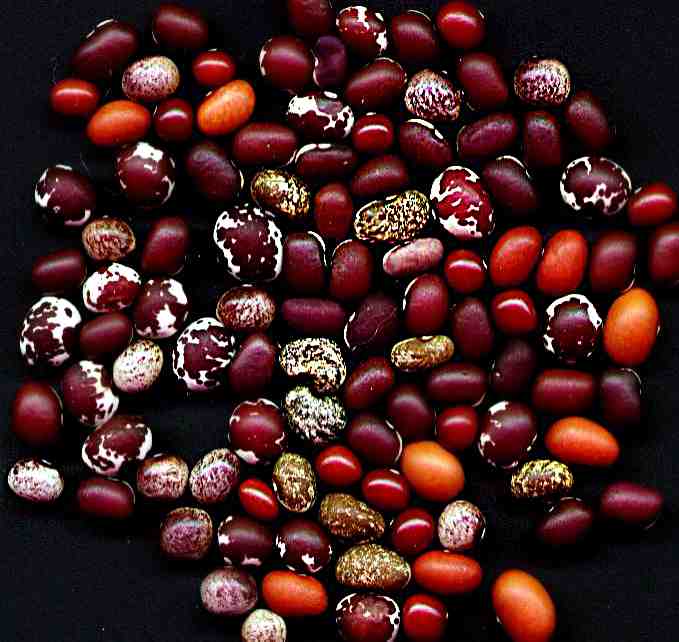 The Inca indians of ancient Peru depended on boiled beans for much of their diet. Many of them lived in the high elevations of the Andes where water boils at a much lower temperature so cooking takes longer and uses much valuable firewood. They discovered that certain varieties of beans when heated in oil would burst from their coats and expand in volume like popcorn producing a nutritious edible food tasting a bit like roasted peanuts. They called these beans NUÑAS.

Still used and sold in local Andean markets today, nuñas are grown at elevations above 2500 meters. They are hardly ever found outside the central Andes region. Like many beans, they show wide variation in color, pattern, shape and size. Although they are a variety of the common garden bean, Phaseolus vulgaris, like many tropical beans they are light sensitive and will only flower during days with 12 to 13 hours or less of light. This limitation severely reduces the agricultural regions where they can be grown to areas relatively close to the equator. With some work this could become a successful crop in many other areas of the world. 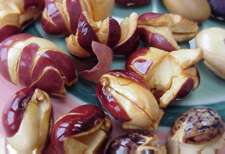 I searched for nuñas for several years before I finally obtained some from the United States Department of Agriculture seed bank. I knew that there was little chance that I could grow them in my garden here in Pennsylvania. The days are well over 12 hours long before I can plant the seeds in May, and by the time they have shortened enough in September, the temperatures are too cool to let the plants grow or mature the crop.

Since I have a small heated greenhouse, I decided to see if I could grow beans in it from August through January. In 1994 I planted my first crop of six varieties. I installed 2 foot by 4 foot growing boxes for each variety and concrete reinforcing wire as supports for the vines. The seeds germinated well and grew vigorously in the late summer heat, soon reaching the ceiling. In October flowers began to form and it appeared that I was on the way to a bountiful crop. In December I noticed the plants were looking a bit mottled and growth had slowed noticeably, because of the cooler temperatures and shorter cloudy days common to early winter here in the lee of the Great Lakes. Then the lower leaves began to fall and I realized I had an infestation of spider mites that was already getting out of control. The visions of abundance began to fade. I tried several different methods of control that were only mildly successful or ineffective. Ultimately I did get a fair crop of beans that at least multiplied my seed stock and gave me a taste of each variety. 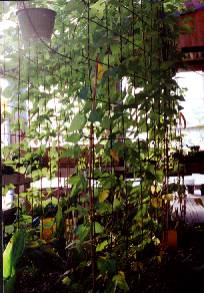 In 1995 and 96 I again tried the experiment and ran into other problems. The plants grew vigorously for a while, then slowed down, and the lower leaves dropped off. Then the leaves progressively higher yellowed and fell off as well. No mites or insects were evident and all varieties seemed affected. I believed then that the problem was low temperatures. In 1996 I was using a newly rebuilt greenhouse following a destructive fire. I had no heat until mid December and the plants deteriorated badly after a vigorous start. Once the heat was turned on and daily temperatures were restored to the mid 60s and above on sunny days, the plants began to recover. I again got enough beans to replace those I had planted with a small surplus. Next year I will try again, this time paying more attention to temperature. I hope to have heating pipe embedded in the floor for even better temperature control.

In the spring of 1998 I pursued another approach. I had been told that if the plant begins to flower, it would become insensitive to day length and would continue to bloom even if the day length changed. I started some plants early in the greenhouse. They began blooming  in March.  I transplanted them to the garden in May, but they grew the entire season and never produced a flower.

During the 1998/99 winter season my problems continued in addition to severe mite and whitefly infestations.  I checked my soil mix and now believe the soil pH is way too low.  I've amended this season's (1999-00) soil mix with ground limestone and agricultural lime to rectify this.  Although the plants seemed to start off better, they slowed down and are suffering as usual again.  I'm beginning to think My problems may lie at least partly with light intensity.  Not only are winter days here short (as little as 9 hours), they are especially dark and cloudy.  This usually begins in October, but this year we were blessed with an unusual abundance of sun well into November.  The weak light may be just too little to support good growth and as a side effect the weak plants may be especially susceptible to insect and disease attack.  Next year I intend to add a supplementary lighting system and provide my plants with 12 hours of light each day.  In the meantime, I've started a new planting in February of 2000 when the days are growing longer and more sunny days provide stronger light to see if I can have better luck. I've also decided to try planting the seeds directly in "beanbags" or bags of potting soil with holes cut for the plants (see picture). 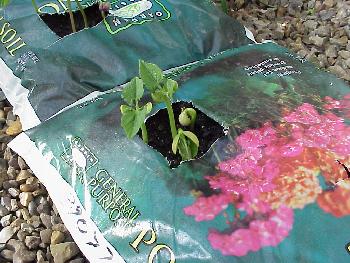 I have finally installed the hot water heat in the gravel floor as of the first of December 1999.

Meanwhile another possibility has occurred to me. It is possible that there are other bean varieties that will pop out there that are not nuñas. I am testing any variety I can find for the nuña popping characteristic. I encourage you to try this too. Just put a few beans in the microwave or in a little oil and heat them like you would popcorn. If you find any that pop and soften, please email me with the details at dan@phantomlake.net. I will be interested in investigating that variety further.

Spring 2001 Update- Continued attempts to grow nuñas during the winter without supplemental light have met with only marginal success. Mites and whiteflies are especial problems because the plants are weak and susceptible because of the low light levels. I want to avoid the expense of light fixtures and additional energy so I have tried starting the plants in mid-February, A month of growth during lengthening days and stronger light levels has allowed the plants to be strong, resistant to pests and begin blooming near the vernal equinox in March. I am interested in seeing if the blooming will continue as the days grow even longer.